John Gotti, the 23-year-old grandson of infamous mob boss John Gotti, was arrested inside his Queens, NY home on Thursday, August 4th. Police had long suspected Gotti of selling powerful opioid painkillers. On June 30th he was caught with 205 oxycodone pills, 18 methadone pills, testosterone, Xanax, and marijuana. Also, for the last three months, undercover police had been purchasing pills from Gotti. The total amount exceeds $45,000. Gotti has previously been seen selling pills at a local tattoo parlor, and has also been caught on a wiretap bragging about selling 4,200 pills a month. When he was arrested Thursday, police found 500 oxycodone pills and $40,000 cash. 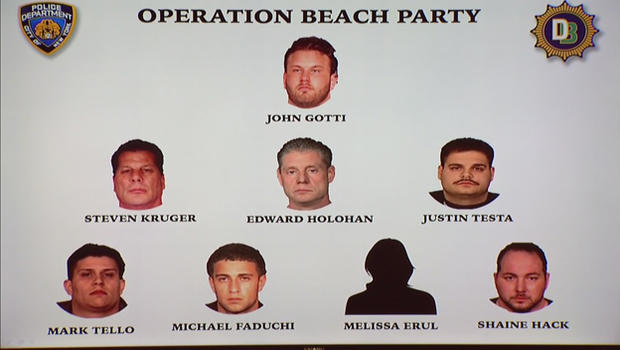 The Gotti home sits on Howard Beach in Queens. It is the same house the original John Gotti used to run the Gambino crime family in the 1980s and 90s. Reportedly though, during this time, no gangster activity was allowed in the house. Lewis Kasman, close friend of the Gotti family, said, “No wiseguy was allowed in that house and the only non-blood family member permitted inside was me.” Apparently, the grandson John Gotti thought differently, as he and 8 others were arrested.

Operation Beach Party was the name given to the takedown by police. Gotti had sold pills at least 11 times to undercover officers, and had been heard discussing the business on the phone. He and his girlfriend Eleonor Gabrielli, along with seven others ranging in age from 23 to 57, had been running an operation out of the beach home. Along with the pills and cash found at the Gotti residence, $200,000 cash was recovered from others involved.

Police kicked the door in, and stormed into the bedroom where Gotti and his girlfriend were. The other seven were scattered around the house. This was the first time ever the Gotti house had been raided.

At the time of arrest, Gotti said he was being “stupid, young and dumb,” and even called the Howard Beach community a “toxic environment.” Whether he was being earnest remains to be determined, but Mr. Gotti did make one move in the right direction following his arrest. He has entered into a drug detoxification program inside of Rikers Island Correctional where he’s being held.

Maybe this can do John Gotti some good, seeing as Rikers Island boasts the longest-running opioid treatment program in the entire country. If all charges stick, he is looking at 25 years in prison. That should be sufficient time for him to sober up.

Previous:
Drug Take Back & Disposal Programs
Next:
Luvo Manyonga: From Meth to a Medal